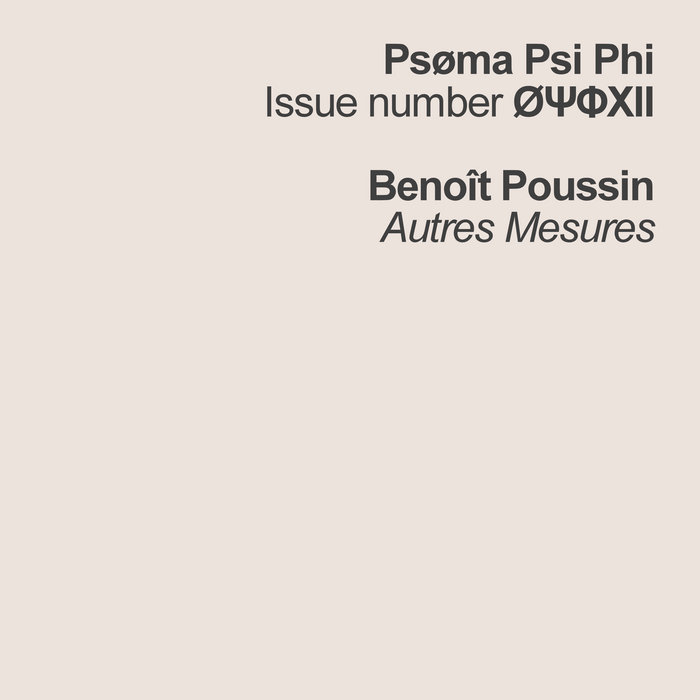 In January of 2018, Benoît Poussin debuted Autres Mesures, an original drone composition that was conceived and performed on the organ inside the Saint-Germain church, in Rennes, France. The organ itself was built in the nineteenth century, and the church it resides in goes as far back as the fifteenth century. Named after the music festival that the piece was imagined for, Autres Mesures exists in two different worlds: the mundane (exploring the voice of an instrument from the Old World, in the spaces of a structure that is even older) and the divine (the actuality of the sound, what it does between the vibration and the emotional/physical responses of the listeners), and the recording presented here dutifully conveys both of these perspectives, and others still.

Interestingly, the church contains a 1664 painting of the resurrection of Lazarus by Gaspard de Crayer, further bringing to mind a sense of appreciation for the ability to draw breath, mindful of each conscious moment, while the euphoric sensations provided by the organ's monolithic exhalation underscore a feeling of rebirth, renewal, resetting and reorienting. With Autres Mesures, Poussin has conceived a fanfare for the self-realization that comes with lucid awareness - an understated but bold celebration of the "now" that is often times imperceptible within the confines of the body, and the all-too-bombarded sensory experiences we come to expect in day to day life.

Sonically, Autres Mesures is similar to recordings by pioneers like Eliane Radigue and Charlemagne Palestine, as well as modern artists like Eleh and Richard Chartier. It hovers in the air, perhaps liminally, never quite ascending into the clouds, but never touching down on land either. Within the warm pool of the organ's sustained tones is an immense chordal structure, the individual notes within it shimmering and bowing like the vocal cords of singers in a choir would. This creates the illusion of movement where there is none, with ephemeral shapes forming in the fog that the organ is breathing out into the vessel of the church.

For listeners present during the performance, as well as the performer himself, this created a physical sense of being truly inside the sound, essentially converting the church itself into a habitable speaker box. Poussin provided additional guidance for the audience, placing selected quotes at different locations within the church, themselves picked for their placement within the organ's reverberations. Reinforcing the sensation of subtle shapes accumulating and dissolving within the sound were low-light setups that varied extremely slowly. In such a time and space, what the body perceives as vibration and what the mind perceives in the lack of well-lit visual stimuli, it becomes possible to consciously enter a gnostic state, suspending the listener's awareness of time passing.

To reproduce this experience as accurately as possible, great care was taken during the night between August 6-7th of 2018, with sound engineer Simon Oriot, to record Autres Mesures without the interference of an audience or external noises like cars and passers by. Poussin and Oriot placed a single dual-microphone in what they considered to be the most ideal spot to absorb the organ's output, while Poussin used strategically placed matchsticks to hold down the keys on the organ, so he could have both hands available to modulate and affect the organ's voicing with the drawbars. Two prior recordings were made of Autres Mesures - one a rehearsal, and the other a recording of the actual live performance, but at the request of the artist, only the formalized recording presented here is to be made available publicly.

For supporters of the physical edition of Autres Mesures, a download code will be sent in the mail, which provides private digital access to three additional versions of the piece: the rehearsal, the live performance and a "reprocess" mix that combines all three, assembled and produced by Brian Grainger. When paired with the CD-R recording, this amounts of over four hours of music, and a truly immersive experience in deep listening.

Written and performed by Benoît Poussin. Recorded at Saint-Germain Church, Rennes, France on August 6/7 2018 by Benoît Poussin and Simon Oriot. Text and design by ABM&D. This is Psøma Psi Phi number ØΨΦXII.