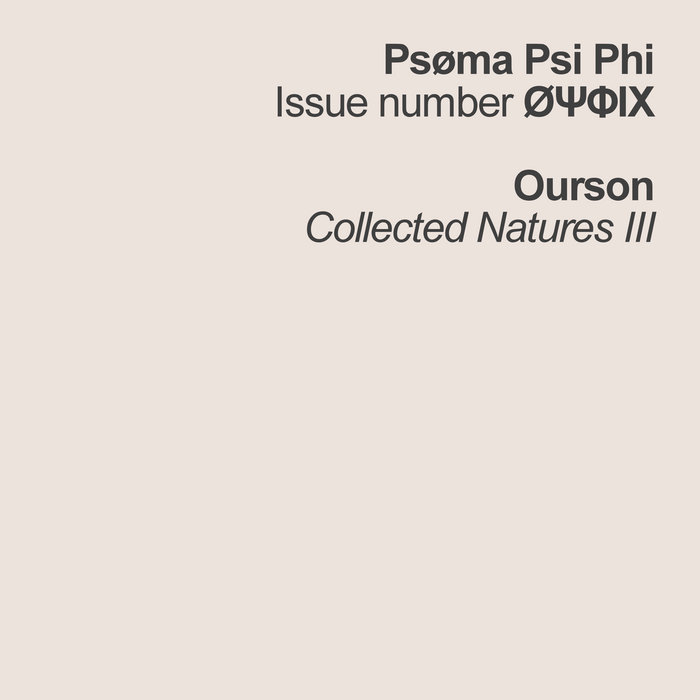 ...and in the blink of an eye, Ourson arrives at Psøma Psi Phi.

Ourson, known to the government as Luke Hazard, has been a close friend, influence, label resource and collaborator going back to 2003-2004, when he was still calling himself Plantre, and I only had a single Milieu album under my belt. Hard to imagine a time when none of these hundreds of records existed, no?

But that's just it...Luke is a master of imagining and time, and his work exemplifies some of the purest and most vivid electronic music laid to tape. He inaugurated the INSTALL label in 2007 with his psychedelic mountain Eth, conjured one of the most beautiful ambient albums of all-time with Warming Plant and even drafted not one but two improvised collaborations with me, which today are not named in the public record.

Finally, inevitably, we are here now - mostly in the here, sometimes in the now - and Luke's offered up a disarming collection of 47 tracks, the third volume of his Collected Natures series of spare and personal field recordings. Gone are the synthesizers, tape machines, FX labyrinths and epic compositions...we are left inside what Luke has labeled as "personal spaces", aural Polaroids that give us only a slight bit of context with a title like "Quiet Window" or "Roaring Lake", and with no effort or exposition, we're off and away...standing on a porch somewhere while the rain dribbles down around us, or laid upon the green grass of an open field scored by birdsong, as the warm sun beams on our cheeks.

When I started INSTALL with David Tagg back in '07, we held a belief, maybe it was even just a method of working, and it stated that absolutely anything observable in the world, no matter how mundane, could have a line drawn around it and called art. Frames and crops are compositions in and of themselves, decisions made by a creative mind that wills into existence contexts and commentaries. Luke has done this here, with his field recording work, giving us a window into a moment that is otherwise his alone. These specific mixtures of wind, trees, outdoor reverberation and everything else were and are completely unique to there and then, and Luke has played the part of a curator, sifting through the mundane and the divine, and laying them all out on a table in front of us with no indicators for which is which.

On a more topical level, listening to field recordings has been a long-time fascination of mine, an exercise in escapism and an impetus for lucid dreaming. Records like Irv Teibel's fundamental Environments series, Kiyoshi Mizutani's Scenery Of The Border and Dan Crall's North all had profound effects on me, and have led me down a path that is littered with documents of the natural world, ripe with what David Tagg might call "dream compost." So, although Luke has framed the windows and I'm holding open the door for you, it is fully up to you to decide the value of what you have found here. Perhaps, instead of speaking or walking or thinking, you might just close your eyes, take a deep breath...and listen.