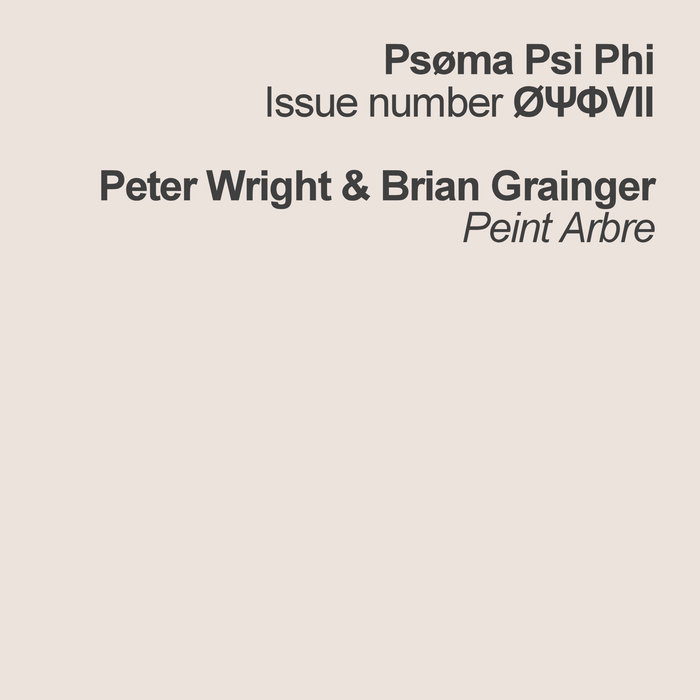 Mark Derby Amid rise and fall of this radiant hush…a tension: never ceasing to be set against a lingering discord, felt in and of the spirit. Favorite track: Grappling With A Cosmic Crisis.

Extralife Wow. This is beautiful. Shut off your mind, relax and float downstream. Favorite track: A More Modern Nightmare.

Initially recorded between Summer and Autumn of 2009, then stashed away in the shade for almost nine years, my collaborative full-length album with Peter Wright is now finally issued forth into the universe. A mammoth album of drones, feedback, sub-bass harmonics and psychedelic textures, set across three different pieces, Peint Arbre is a dense and enveloping trip through the tangential and exploratory minds of two men, working almost 8,000 miles apart.

Peter Wright, if you are unaware, is an outright legend of drone music, guitar improvisation and spectacularly filmic textures, having been active in the New Zealand experimental music culture since 1992. I've long been influenced by his recordings, and in 2009 I was lucky enough to host his epic Snow Blind double-album at INSTALL, the now-defunct label I co-operated with David Tagg. We followed Snow Blind with a vinyl release of Wright's transcendent Orbit, and he also guested on my One Bleak Try album, lending many additional layers of sonic seasoning to the track "Black Rust Caress."

Since INSTALL closed its doors years ago, I've wanted to give this unreleased album we did a proper release. Since so much time had passed, Peter decided to revisit the recordings and add/subtract some things to bring it into its present form (so for those few out there who heard this album in its previous iteration, this is a different beast). Peint Arbre is an interesting cross-pollination of my distorted bass monolith drones, generated using guitar and organ in the Rolling Knoll studio, and Peter's contributions of guitars, vocals, percussion and all sorts of other instruments. Indeed, it feels very alive, and that is almost all Peter's doing - I merely provided the initiative steps. So it follows that hopefully another collaboration is due between us, and the door is of course always open for Peter to issue something of his own here at Psøma Psi Phi.