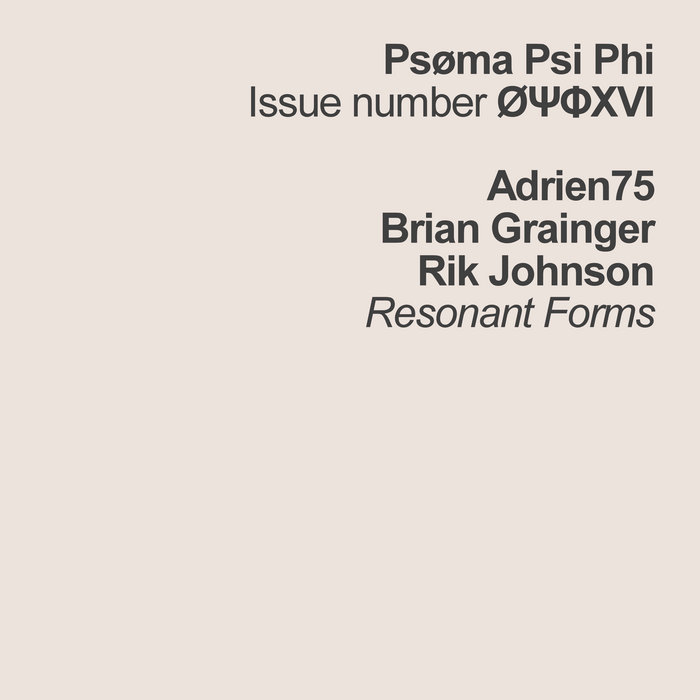 Resonant Forms is the first three-way split release issued in the Psoma catalog, consisting of three different blocks (around 20 minutes each) of improvised music, contributed by three different guitarists: Adrien75, Brian Grainger (myself) and Rik Johnson.

Having been friends with and influenced by Adrien75 for several years, it was surprising to both of us to stumble over the fact that we were also both mutual admirers of Rik Johnson's beautiful work with the instrument. It felt predetermined then, that we should all at least attempt some kind of collaborative release, and once Rik agreed to join us for it, I set up the basic rules: We would each submit around 20 minutes of material, which could be a single piece or many different ones, using only live takes of improvised guitar music. There were no restrictions on processing or FX devices, only that there should be no overdubbing and everything played should be as informal and unprepared as possible. In short, I wanted to hear the sound of the three of us playing guitar, and nothing else.

Stylistically, what emerged is a beautiful set of performances that all seem to sense each other, despite each of us working separately without hearing what the other two were doing. All three of us used subtle detuning effects, filters and reverbs, making the set somewhat unified despite hundreds of miles and radically differing rigs between us.

Opening the set is Adrien75's single piece, "A Series Of Ordeals", which is a suite of several movements in and out of looper sprawl and textured fray, that immediately recalls his lush guitar work on the landmark album Coastal Acces, issued in 2002 on Source Records.

From there, Rik plays five different pieces of melancholic chord changes, gorgeously evoked from finger picked sections and overlaid lead lines that weave around in forward and reverse motions. Rik's work is the least well-known of the three of us, something Adrien and I feel is a criminal shame. It reminds me of lots of different things that I love about quiet and sad guitar music...Roy Montgomery, Manual, Loren Connors, even a little Mogwai. Hopefully, Psoma 16 puts Rik's work in more people's ears, where it clearly belongs.

Closing the release is my contribution, "Seconds", a single extended piece I played using a handful of different pieces of processing FX that I'd inherited or bought from another close friend, guitarist and influence, David Tagg. "Seconds" is filled with looping mountains of ambient blues, similar to some of my past albums like Eight Thousander, Nine Billion Names and Blue Wheatfield.

After completing the work for these pieces, we all three agreed that we'd like to attempt further iterations of this idea, in the future. For now, Resonant Forms stands as a very accessible and, we think, potent entry in the Psoma catalog, and an engaging sixty-minute tableaux of improvised guitar music that pairs well with the Autumn season.

W/P by the credited artists. Mastered by The Analog Botanist, except #7: Mastered by Adrien75. Text & design by ABM&D. This is Psoma Psi Phi number ØΨΦXVI.

#1 improvised & recorded live on Saturday, September 28th, 2019 at The Home Office, using a Fender Jazzmaster electric guitar with Hologram Infinite Jets / Red Panda Tensor / DOD Rubberneck / Electro-harmonix 95000 pedals. The live recordings were then edited to form a suite. Dedicated to a family member going through his own series of ordeals.