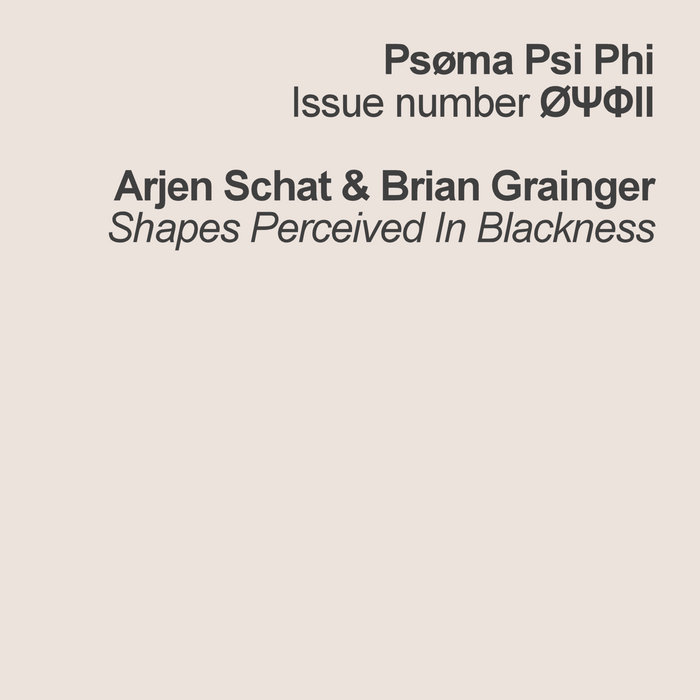 Having worked together on many different occasions in the past, Arjen Schat and I have once again collaborated for this massive P / Psi / P release.

Essentially a four-part album of two original pieces and two reinterpretations, Shapes Perceived In Blackness consists first of "Mantra", a nearly hour-long piece from Arjen's studio of a few years ago now. It would not feel out of place next to works like Primal or Oppidium Arnoldi Villa, both records I've spent literal years inside, exploring. Arjen's work was paramount for my mental health when my daughter Penelope was born and came home from the hospital. When I could only take small breaks for rest, Arjen's music was constant at my bedside, effectively deflating the stress from my mind and body and letting me get the most out of the downtime I had.

Backing Arjen's stellar piece is an equally long atmosphere titled "Obviation", which was also recorded years ago now, and for one reason or another, left to quietly age in a box in the studio. Intended as a tape-worn, humid companion piece to Arjen's crystalline monolith, "Obviation" recalls the sticky Summer nights so frequently present in my old studio in the subtropics. Hovering, almost-chords waft between slow gusts of air, analog fuzz and hiss-crusted phaser waves.

I was recently honored with the invitation to pen the liner notes inside Arjen's forthcoming vinyl LP Spectrum (check it out here: arjenschat.nl/album/spectrum ) but I feel it is pertinent to note that this release should also serve as evidence for just how much love and respect I hold for Arjen's work. That we can continue forward with our ideas in any kind of unison is a pleasure and a career highlight for me.

NOTE: The physical version of this release comes with two more extended pieces, each of us reinterpreting and recontextualizing each other's piece, making it a four-disc affair. The additional 2-disc release is titled Colors Perceived In Silence, and is exclusive to the physical format.